What’s the best way to get to know the locals when you move into a new area? In Britain it’s simple – just head for the local pub. But in Bavaria, to fully integrate, you must join what’s known as a “Verein”. The nicest thing about these associations – whether they involve playing skittles, skating on ice or fighting fires – you don’t actually have to do any of these activities. You simply need a strong bladder – but more on that later.

Here in the Hallertau it’s a straightforward choice: You either join a football club or sign up with a marching band. Every single town, often the teenyweeniest village, has its own “Blaskapelle” – or “blowing band”, if you want a literal translation. Frankly, neither option really fires me with enthusiasm. The only instrument I ever tried to learn to play – the humble recorder – was a disaster. I simply couldn’t blow and keep my fingers over the holes at the same time, and my poor music teacher was obviously at her wits end when she wrote on my school report “Tim is totally devoid of all motor skills”. So that just leaves football. Hmm…

Bavarians take their football clubs extremely seriously. When they talk of “Vereinsleben” – life as part of an association – they mean precisely that. Their whole life revolves around the club. When the village team plays, for example, housewives commonly spend all weekend cooking up a storm to serve their menfolk after the game. Sadly I’ve no time for football and my Hausfrau credentials would hardly pass muster, so it seems I’ve no choice but to try for the “Blasverein”.

For a second opinion on my musical talent – if you can call it that – I consult Stephan Ebn. Ex-drummer with pop diva Gianna Nannini, Stephan regularly tours with the band Middle of the Road, whose hits include  "Chirpy Chirpy Cheek Cheek”. They still play this earworm on Bayern Eins, and I catch myself humming it as I ring the bell of his studio in the pretty little town of Abensberg.

Foreigners often have this stereotype image of Bavarians dressed in lederhosen marching to brass band music, but Stephan quickly points out that Bavarians hardly play the best “Blasmusik” in the world. “That’s because of our beer consumption”, he tells me. “We join a “Verein” not to play music but to drink”.

I suspect Stephan already has a notion about my poor coordination skills when he suggests I try my hand first at drums: “Anyone who can’t play well in a band gets the drums”, he tells me. Standing astride a ginormous bass drum – 30 times the size of a regular pizza – Stephan demonstrates the basic marching beat, and then hands me the sticks. It’s easier than I expect and, feet pounding up and down to the Boom, Boom, Boom, I’ve soon got the hang of it. Next up, Stephan gets behind the full drum kit and shows me the “roll”, used to herald the start of a march. This is much harder, and Stephan patiently watches as I try, and retry, to multi-task on cymbals and drums, whilst pumping the foot pedal.


The lesson's over far too quickly. Celebrating with a high five, Stephan encourages me to audition with our local brass band in time for next month’s Gallimarkt, the region’s greatest beer bonanza, second only to the Oktoberfest. There’s just one thing though, he says. All of a sudden I’m nervous. Will he criticise my deficient motor skills? But no, he’s pointing to my Bermuda shorts and smiling: “Don’t forget to wear Lederhosen, okay?”

Will the local Blaskapelle take me on? Watch this space…
um September 02, 2014

Blow Brexit, here comes Brit in Lederhosen (it could be wurst)

Blow Brexit, I wanna be Bavarian! Is it true that Germans…. do have a sense of humour? are afraid of drinking tap wat... 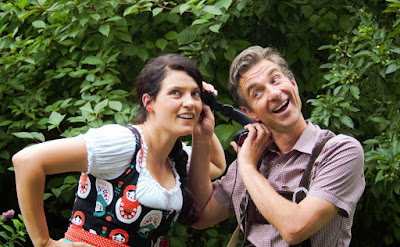 Best of Being British in Bavaria